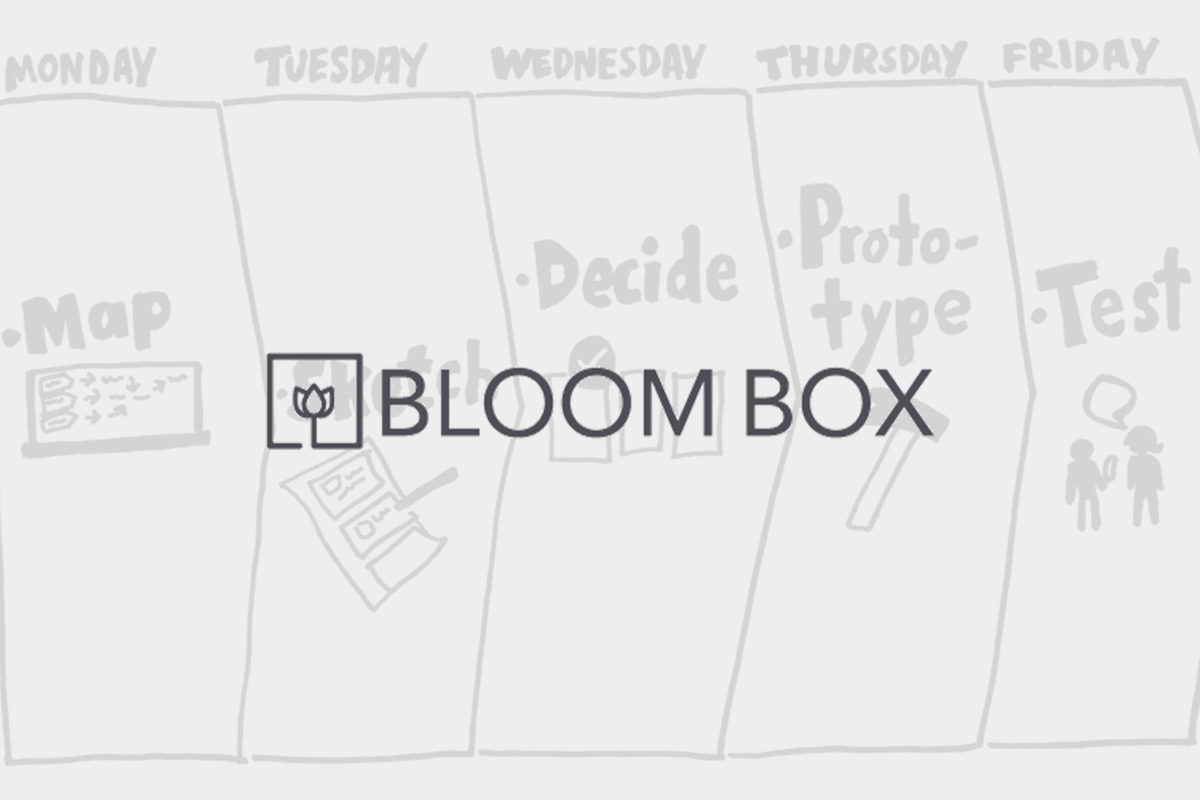 Bloom Box is an online flower shop aiming to offer their customers a unique and fun experience when purchasing customisable bouquets and flower arrangements.

Based on this, as a long-term goal, Bloom Box wishes to offer their customers…

“…a shopping experience that is as fresh and fun as the flower-boxes.” 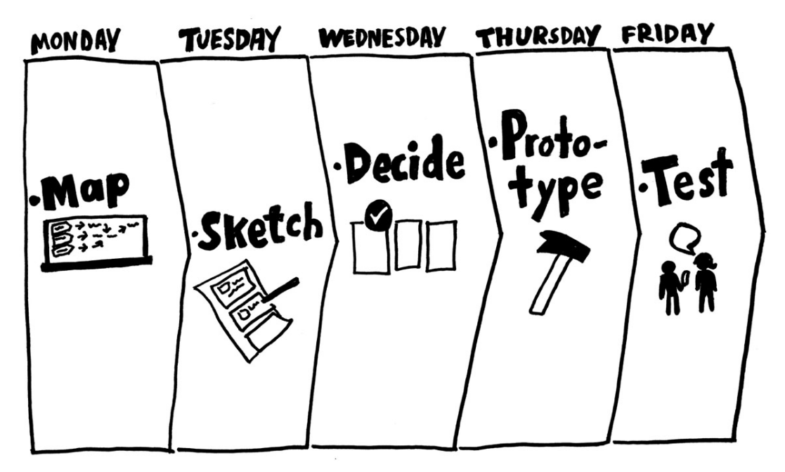 What flower buyers and experts have got to say

Customers seem to have an overall negative experience with the big online florists such 1800 and Teleflora.

Shopping locally is appealing because it’s more personable and one can see, touch and smell what the final product will be.

Experts find it hard to meet demand peaks and manage inventory due to perishable nature of the goods.

Some of the pains shoppers experience…

… and some gains they’d love to have

We made assumptions and we questioned them

Given what we know so far, what assumptions could we make? What questions could stem from them?

Initial hesitations in this exercise were dispelled when we understood that any assumptions we make, whoever we ‘impersonate’ (the business, the user) are customer-centred regardless.

Delving a little deeper – The Map 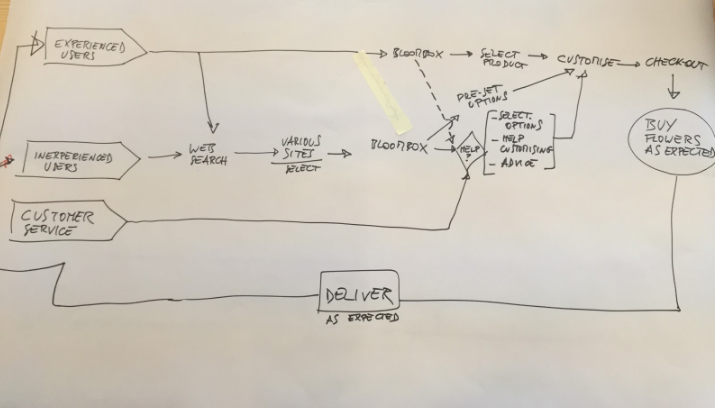 We decided on an initial distinction between experienced users (they know Bloom Box and online shopping) vs newbies.

We included a 3rd person, a customer service rep, potentially filling playing the role of ‘virtual shopkeeper’ who would help out, if required.

Having mapped out the possible high-level tasks our customers need to carry out to reach their goal, we then jotted down a lot of questions that were meant to deconstruct the bigger problem and identify smaller focus areas in which we might be of assistance.

Having two votes each, we chose our favourite HMW questions. 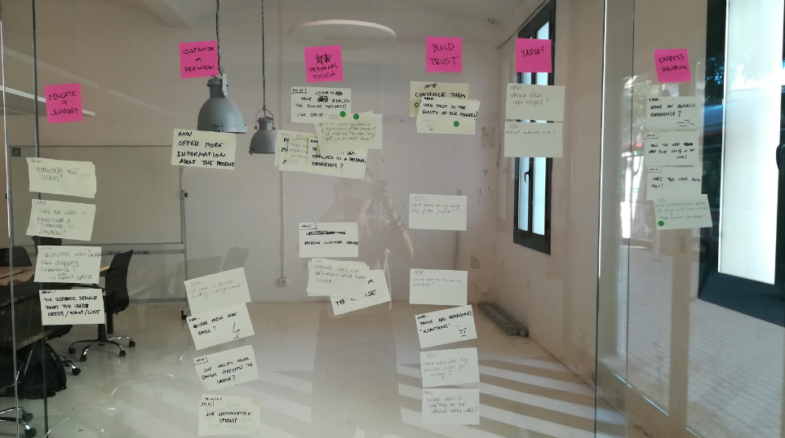 Looking back at our map, it was clear that the target area we wished to address was the ‘Select Product → Customise’ steps.

In a quick discussion, we decided that the two should be combined in one task.

Divide or swarm? We opted for swarming: the step was ‘Customisation’ and each one of us would go wild on it. 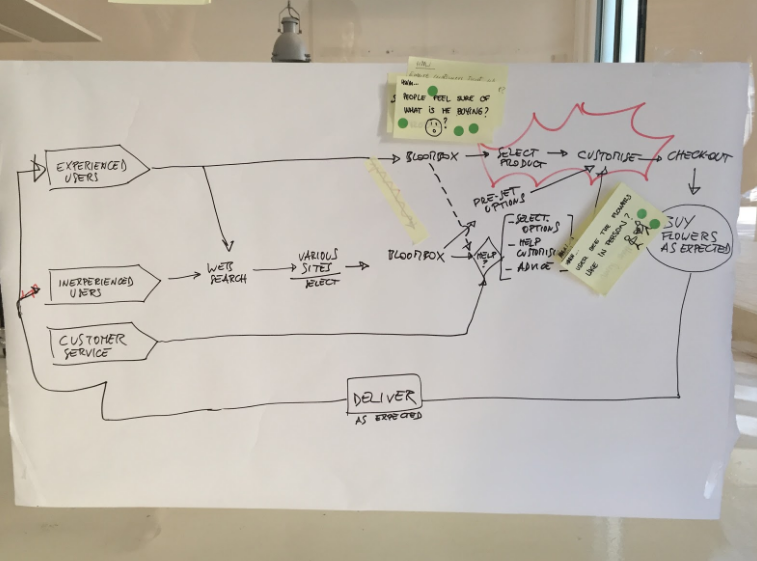 Each one of us had to find two or three companies, websites or designs that contained an interesting ideas and ways of handling customisation.

3 minutes was the time for each demo.

An appointed note-taker then sketched each idea on a post-it.

Once we had all the sketches on the board, we took another good look and tried to capture the main ideas next to each drawing. 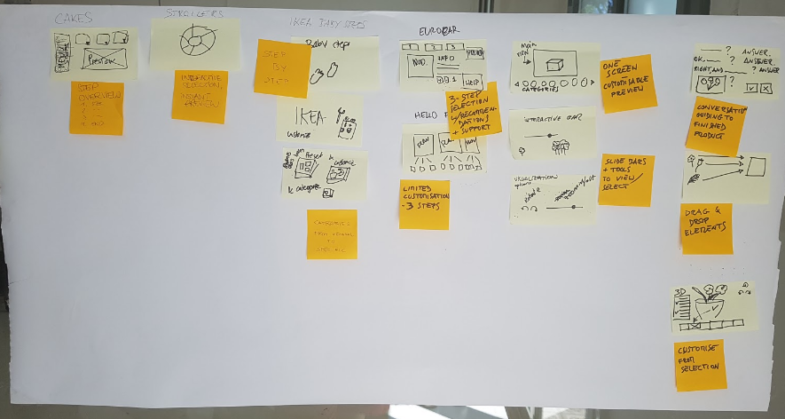 Aptly inspired and with ideas swimming in our heads, we were ready to start focusing on the next big phase, sketch, itself made of 4 stages: 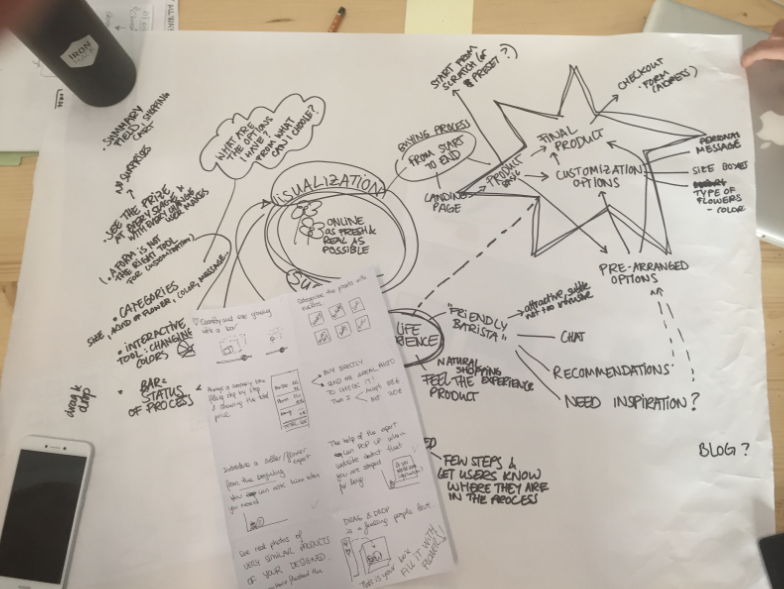 Having gone through a phase of exploring ideas, first without constraints, then with the ‘crazy’ constraint of one minute, we were ready to put some method into our madness.

Tell a short story with a bit more detail, but still centred on the core functionality

The mantra for the day was: Decide today, build tomorrow

The idea is to explore all 3-panel storyboards silently on an individual basis and refrain from judging the designs just yet. 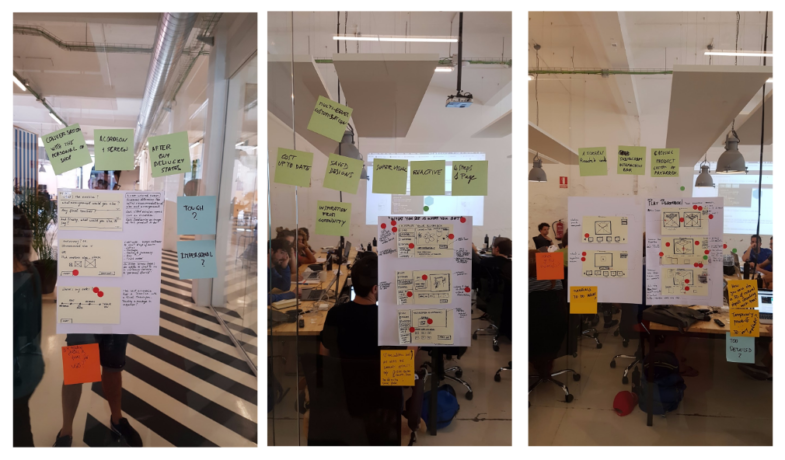 It’s hard not to criticise from the start. We had to remind ourselves that the first moments of observation were not about judging

It’s in the nature of the exercise to raise criticism, nobody should take it personally

The Storyboard – Imagine a User in Action

Having decided on a design to adopt, it was now time to develop it in more detail, visualising it in action in the real world.

The main idea was to imagine a scenario in which the user needed to use Bloom Box’s online services and follow her through the process, from the moment that triggered that need, until the finished product was ready to be purchased. 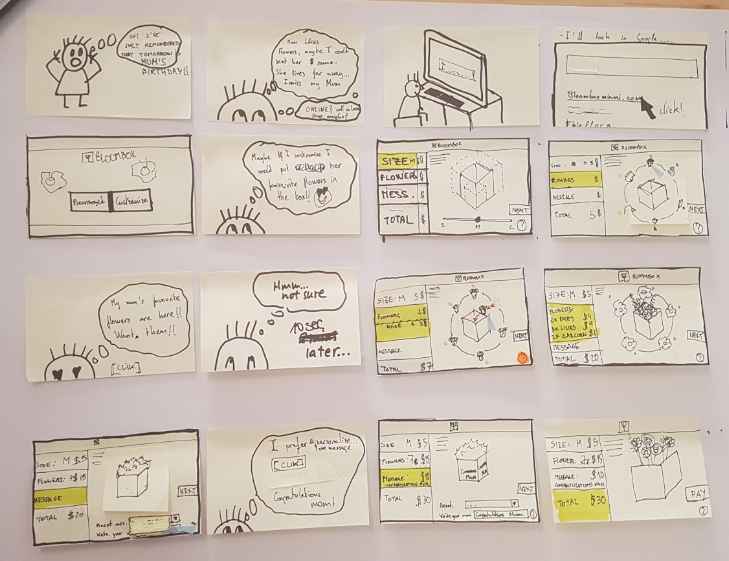 Time to Prototype – The RULES of Prototyping

Cutting-edge technology was utilised in the creation of our state-of-the-art prototype solution: paper, scissors, markers, sharpies, post-its and some sellotape.

We only had one version, but if two or three variations are built for some A/B testing, then assigning each solution a name is might help to tell the solutions apart.

Time to Prototype – The ROLES in Prototyping

Depending on the size of your team:

We decided to wear at least two hats, e.g., Maker and Stitcher or Asset Collector and Maker, to handle workload and time left.

The Prototype – Things we did well

Collaboration. The only roles that were somewhat removed from the actual making of the prototype were the Writer and even more the Interviewer. However, the Writer would keep an eye on progress and satisfy the request of the maker/s and the Interviewer jumped briefly in at the end and adjusted the script based on final results.

Getting stuck and unstuck, using the same tactics as during the rest of the week, i.e., acknowledging we had reached a dead end and it was time to move on. Foer instance:

Referring back to the original long-term goal and its key principles (easy, fun, personable)

Completing by the deadline with an interface that actually looked simple, clean and easy to manoeuvre

The Prototype – Things we could do better

Clearer decisions at previous stage. When creating the storyboard, we should have expanded a little more on certain parts of the functionality we decided to leave our of the story, e.g., personalised support.

As we left it until the last minute, our third principle of ‘personable’ wasn’t quite fleshed out properly and we’d need to iterate on it

Better communication before starting to ‘make’ to avoid misunderstanding later on and some frustration stemming from it. E.g., we didn’t quite agree on the mechanics of some step such as how to select flower types and flowers.

Doing a dry run of the interview was also very valuable to have an initial feel for the interface and to catch some very last minute details we missed out.

The moment of truth finally arrived on Day 5, time to sit some users in front of our state-of-the-art technology paper-based interface and get some open and honest feedback.

We could run four 15/20 min long recorded interviews which we thought went quite well overall and gave us an indication that our solution was simple, fun and somewhat fresh.

A quick debrief after each allowed us to collect our feedback (negative, positive and neutral) on post-its that later ended up on a feedback board

Generally not departing from our guiding principles – except for ‘personable’ – had been our main concern and the usability tests confirmed we hadn’t generally deviated.

To quickly visualise what type of feedback we managed to get, we put our collective post-its on a white board.

We then proceeded to categorise by type of feedback:

Following an initial categorisation which confirmed our initial impressions of not having strayed from our main goal, we grouped the post-its by their nature and identified which part of the functionality they referred to.

We then proceeded to identify our next steps to improve the interface where it needs more work. 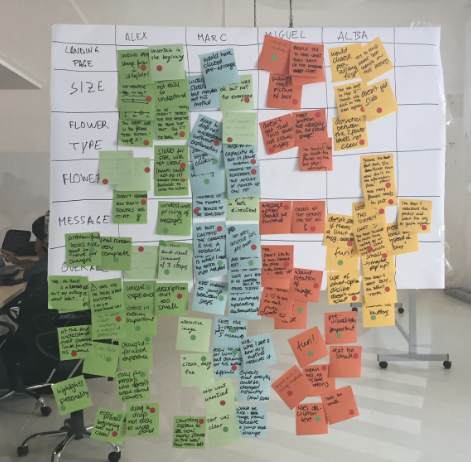 We’ll need to reiterate on:

Next – we agreed we might have to go back to some HMW questions and some lightning demos for functionality that was misunderstood.

Some crazy 8s and A/B testing should also be done until the above points are tackled and ready to be tested again for usability.

Thanks to my stakeholders team in this Design Sprint 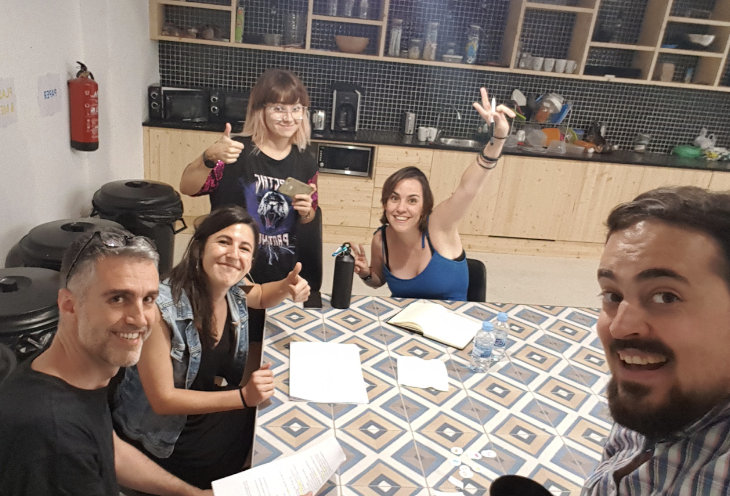 Sandro, Verena, Matilde, Laia and me.