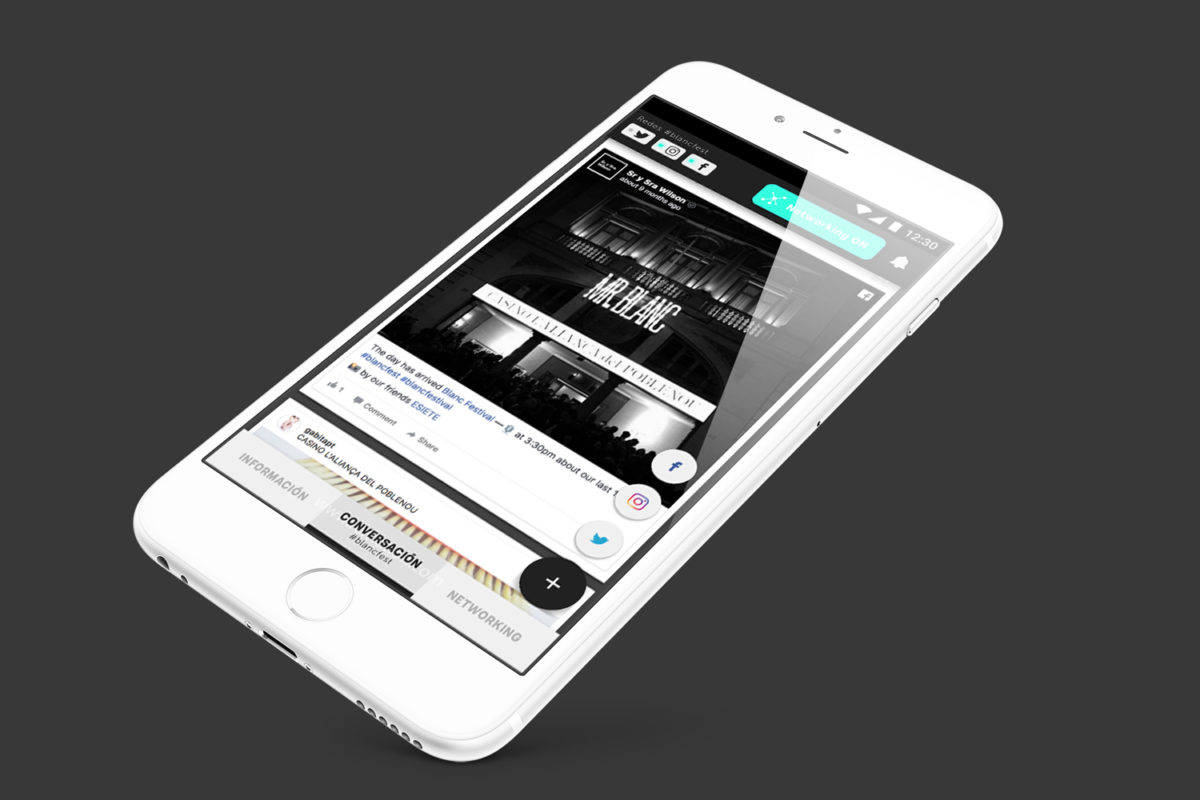 Blanc is the Catalonia’s Graphic Design Fest, probably the funniest and more inspiring of its kind and I’ve made an app for it in two weeks.

The starting point of this project was to understand the needs of the attendants before, during and after the events and build a digital product to help them.

I had two weeks (from July 21 to August 4) to make a proposal so I followed some of the Google Design Sprint methodology mixed with more traditional Design Thinking technics. 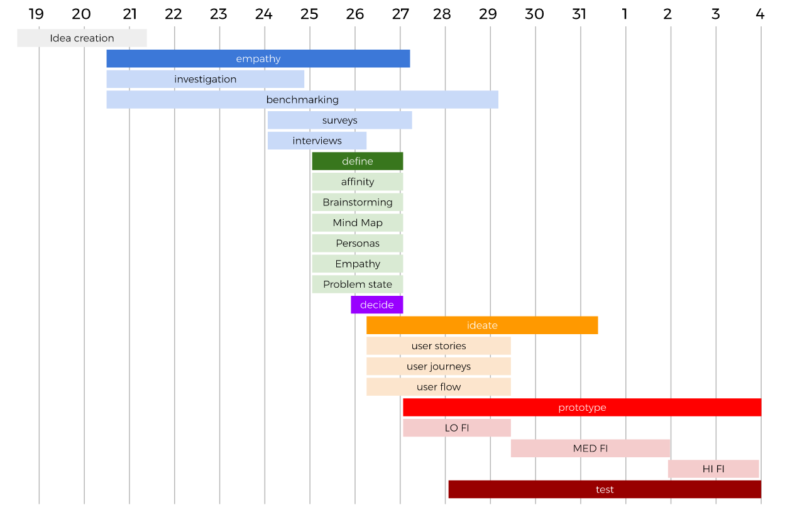 As a digital communications manager of the festival I already detected some communication needs during the festival from previous years that couldn’t be solved with traditional leaflets or stage announcements.

After reading some satisfaction surveys from 2010 to 2016 I listed some pains but I wanted to had more valid data so I designed a survey and an interview.

Also I checked the statistics for the past years and I could form a first approach of Persona with the average attendant. Woman of 30, freelance, graphic designer, Catalan and man of 40, self-employed in a studio, graphic designer, Spanish. 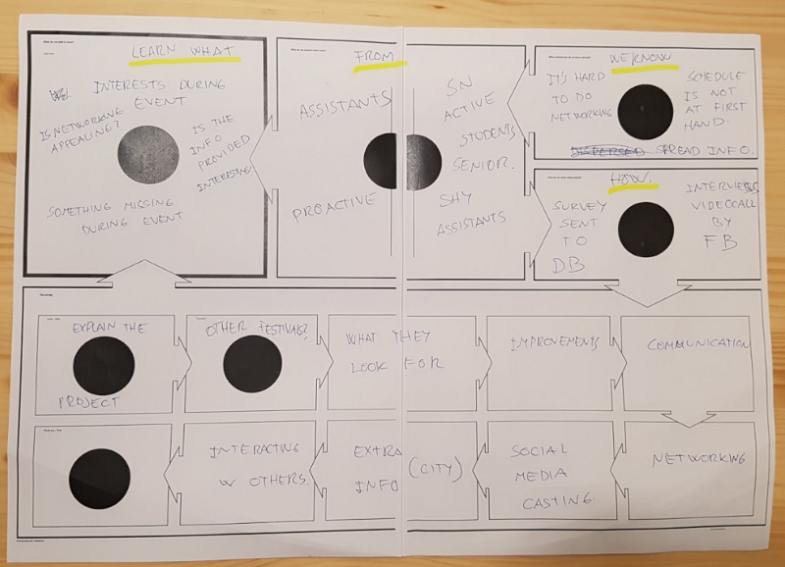 Lack of space and time for networking was one of the biggest issues detected in the satisfaction surveys so I wanted to focus on networking and festival communication.

The survey had two parts:

I asked in a three different ways about the use of dating apps and the response was very clear. Of course people lie but not everybody! so the data vas valid enough to not be worried about this. 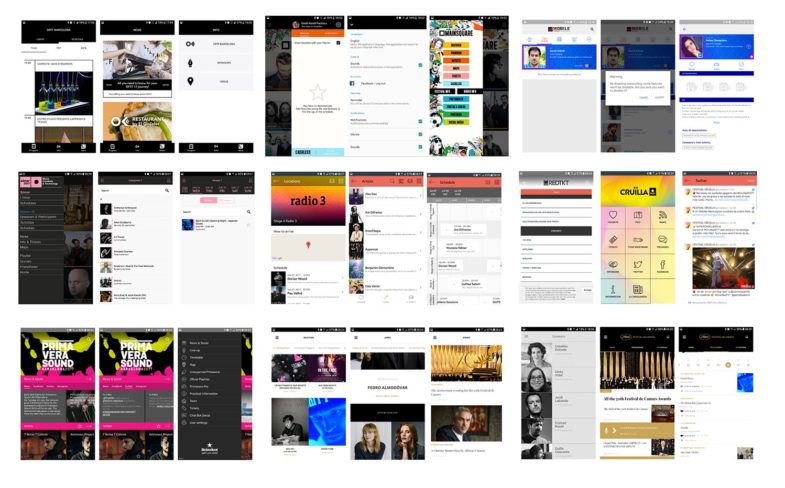 I needed to synthesize all the data in order to turn it into actionable information.

I used Trello to disect that data in order to find insights and patterns. 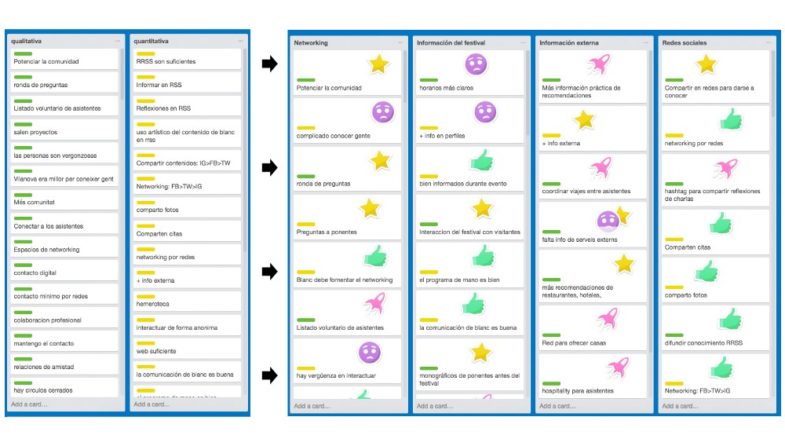 I also used Trello to complete the benchmarking analysis, jotting down the recurrent features and detecting the ones useful for my product. It was like a Lightning demo plus deciding process. 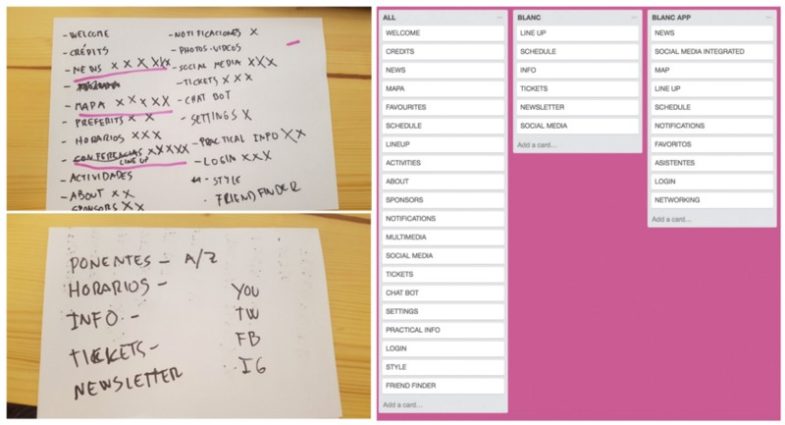 Defining the persona was easy because I had the statistics from previous years and I knew the profile of the Blanc attendant. 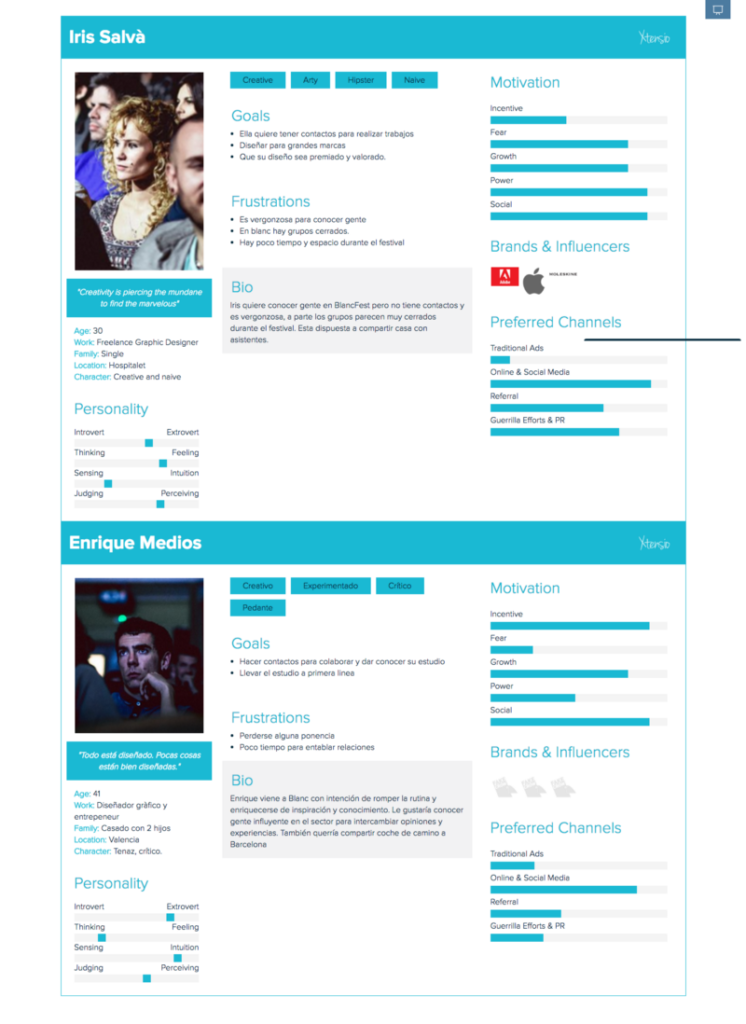 People willing to connect with other attendants or speakers need a space to do it since normally there is no time and space or nerve to do it.

To start the ideation phase I wrote some of the user stories: 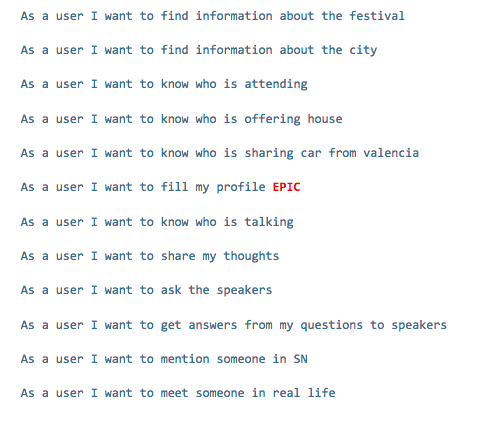 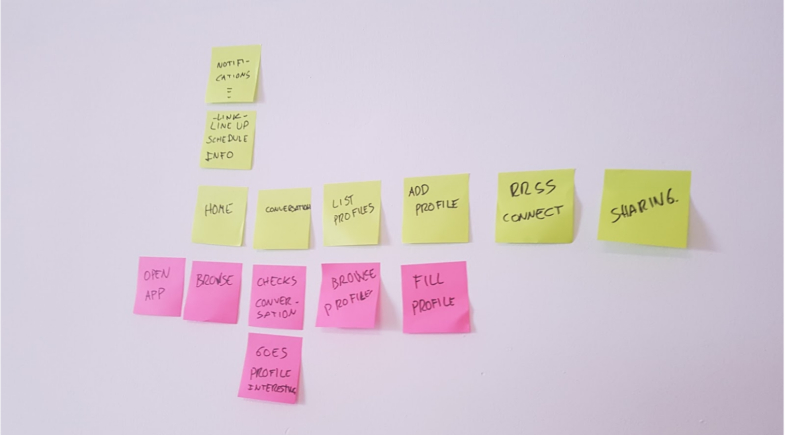 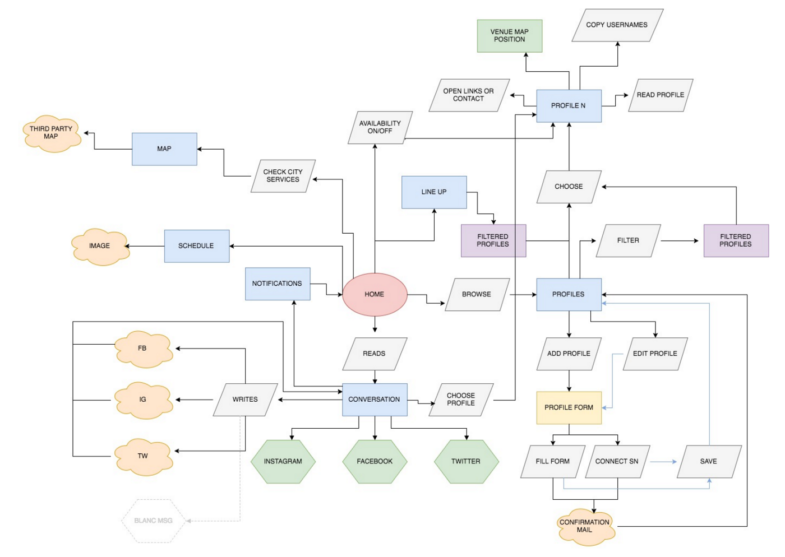 user journey iteration 1 made with Draw.io

After creating the first User flow I detected some flaws and I worked in solving the next problem:

How to connect the digital networking with the real world networking

I did some Crazy 8s session to find the answer: 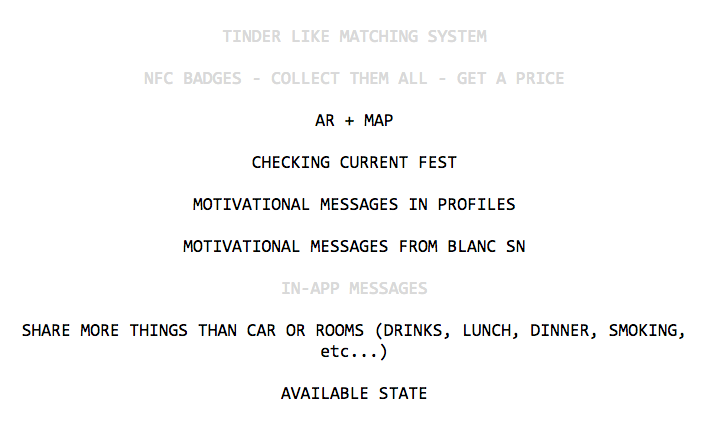 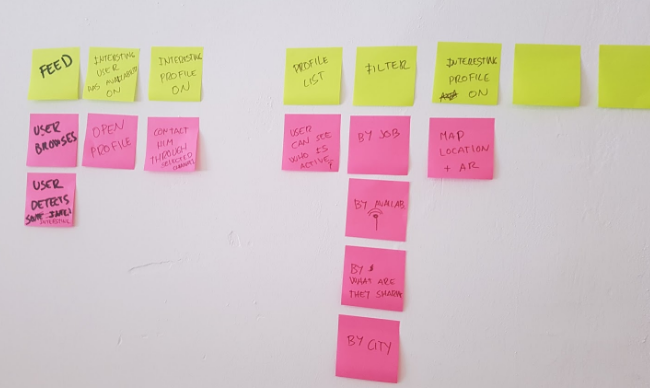 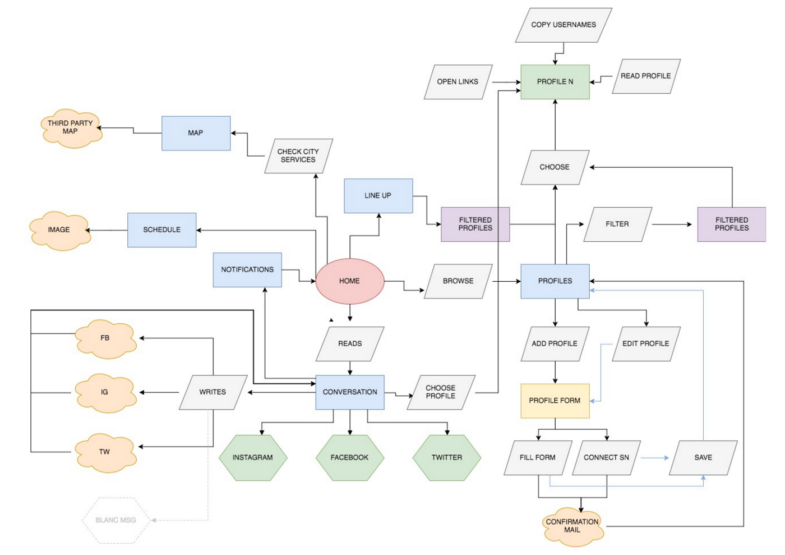 User flow iteration 2 made with Draw.io

And before prototyping I designed the user journey for the On Boarding. 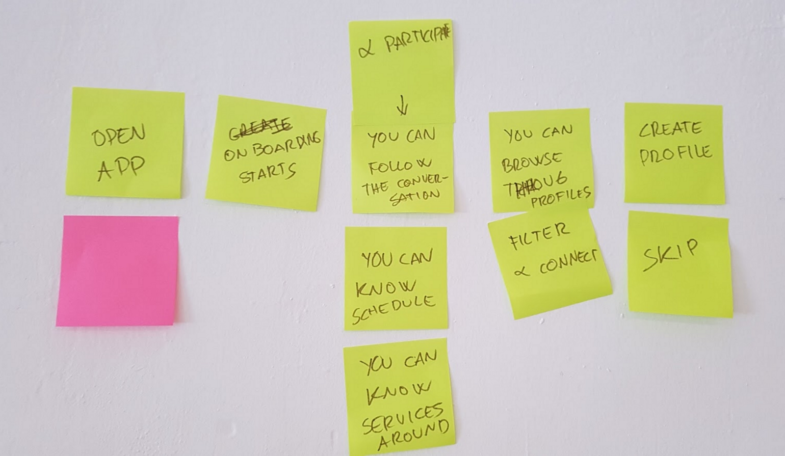 Drawing in paper templates and using Marvel as engine I did the first testings where I detected more flaws and ways to improve the experience. 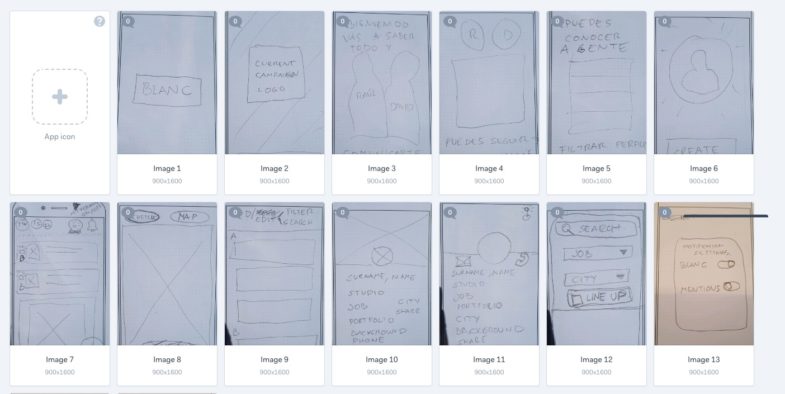 I started using Sketch already, it was the right tool to use for the medium fidelity prototype. 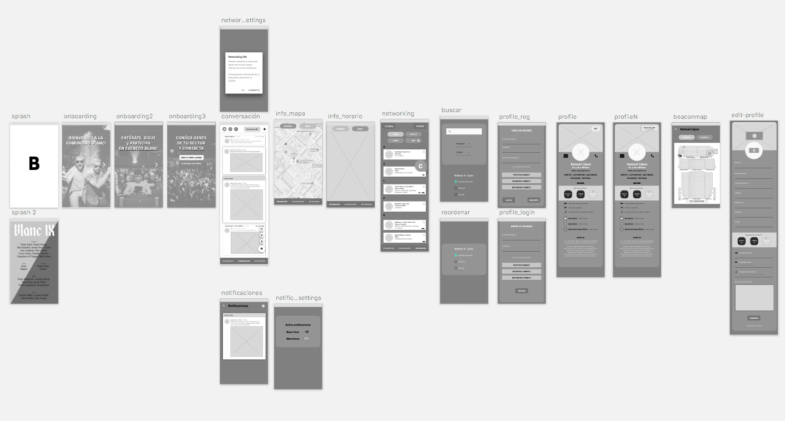 While designing the medium fidelity prototype I was thinking in the final layout so I used the “Blanqueta” typeface, the official typeface of the festival. I wasn’t sure about this because it’s too bold and playful for little screens but it was kind of a commitment to use it in the project. Combined with a more serious and sans serif typeface for long texts and annotations could work. 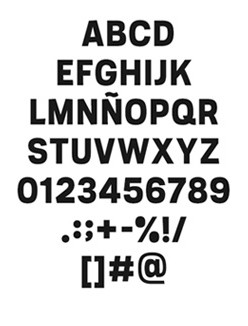 I conducted the test with Invision.

After some testings I could improve the product so I revisited the user flow once again. 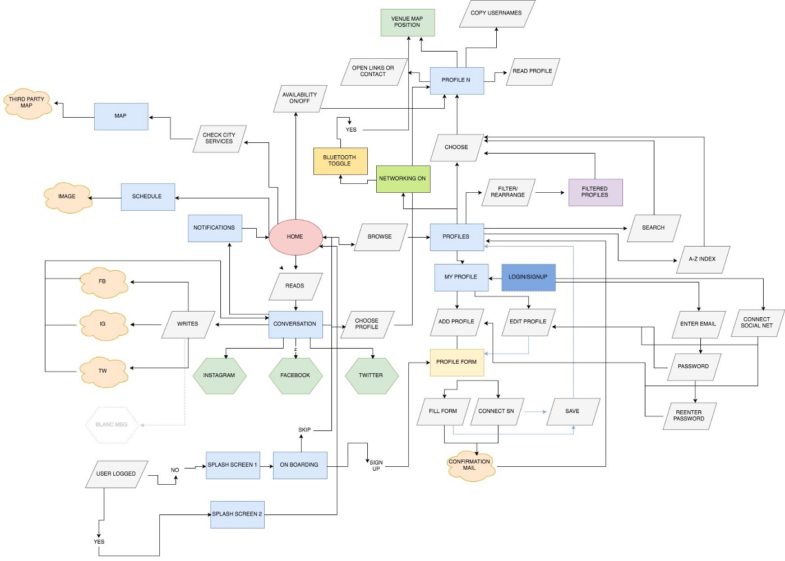 user flow iteration 3 made with Draw.io

Before the final design of the high fidelity prototype I made a mood board with the festival characteristics and different graphic lines for the past years.

Blanc Festival has the perfect combination of crazy and serious. Photos by Martí Pujol & Marina Roca 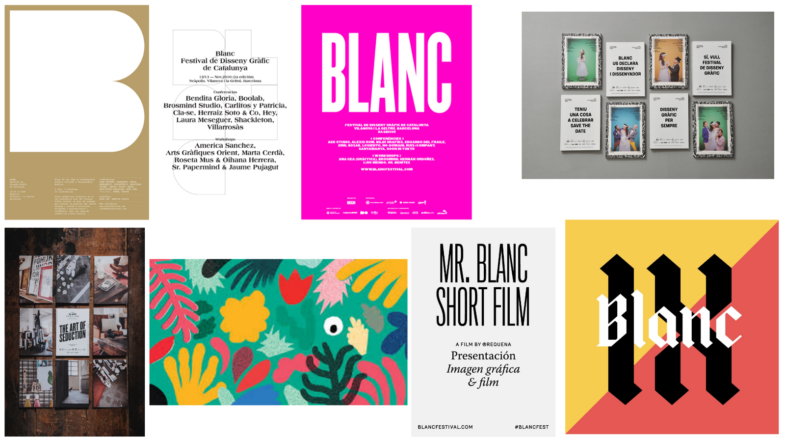 I had a problem!

Blanc doesn’t have a regular graphic line, so I decided to use the sole recurrent element they have, Blanqueta typeface. Although some of the graphic lines didn’t used it.

I wanted to do a custom UI based on the forms of Blanqueta and since Material design is bold and playful already it was the base of my custom UI. I increased the radio in the round corners and thickened the strokes in the icons.

I talked with Raúl Ramos, co-director of Blanc Fest and with the Blanqueta typeface designer Joan Carles Casasín for recommendations in combining Blanqueta with others. The final choice was Museo Sans.

To solving the colour scheme I wanted to try something adaptive.

So the basic idea is to have a UI in black shades with a bright colour for highlighting and when the new graphic line arrives its palette is applied like a chameleon. 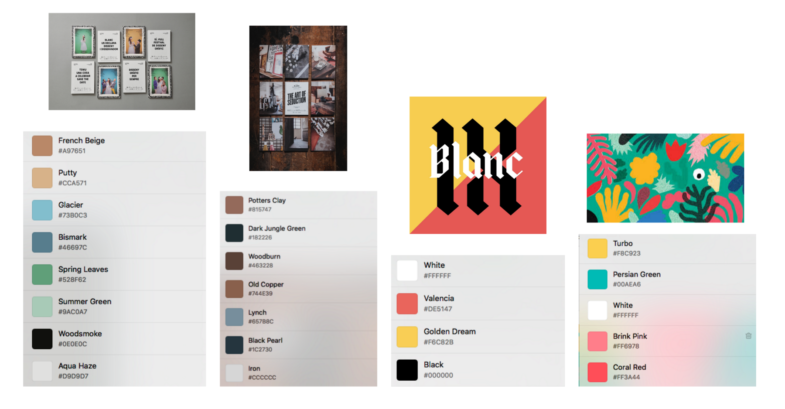 Sketch file with all the screens

Why a Dark UI? One of the reasons is that since it is going to be used in a design fest when there is a talk and the seating area will be dark, we don’t want to bright faces and be annoying for the people around the user. 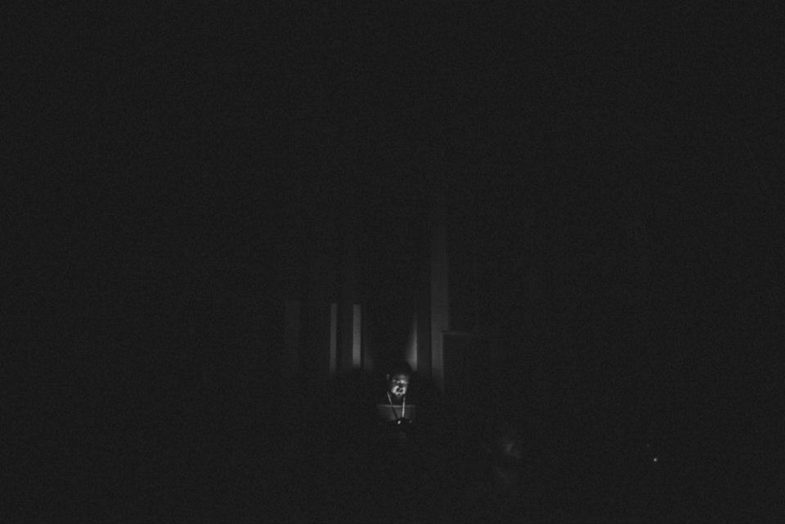 photo of me by Marc Bordons at Blanc Festival 2013

Details are the key so I thought about some empty and partial states:

Applying the colour schemes from 2015 and 2017 graphic lines only to details and some navigation and functional elements would look like this:

For the final prototype I used Flinto to show the flow, create the micro and macro interactions and the screen transitions.

Blanc Connect is an app for increasing the opportunities in networking among the attendants of Blanc Festival and it has the following features: 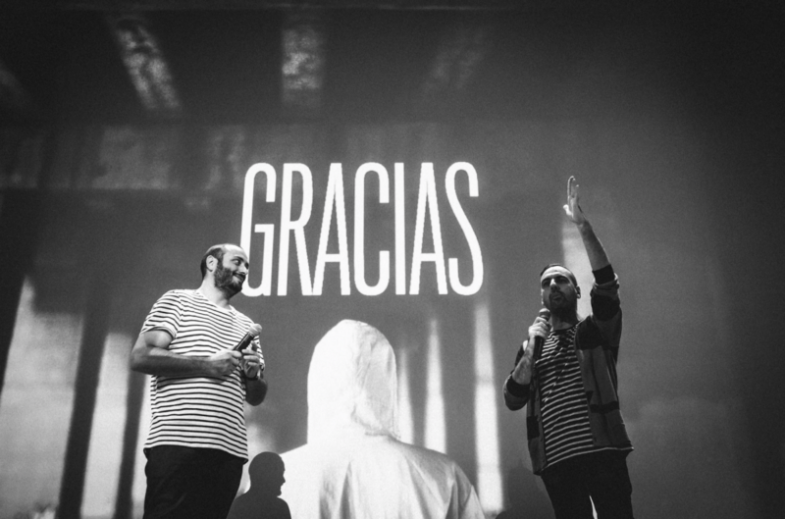 Thank you if you read it everything!! TLTR!!